Gravity: It still works. Even for the Palestinians.

No, gravity is not one of the laws that can be ignored as "Palestine exception."

The Palestinian National Council for Promoting Values is now promoting the concept that "what goes up must come down", and is encouraging people to refrain from "celebratory gunfire".

Who would ever have guessed that shooting in the air is harmful behavior that could possibly hurt someone? Yet in the Palestinian territories it takes a public service campaign to get the message across that gravity still works. 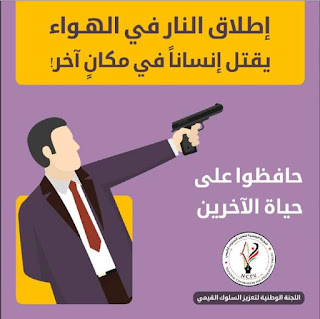 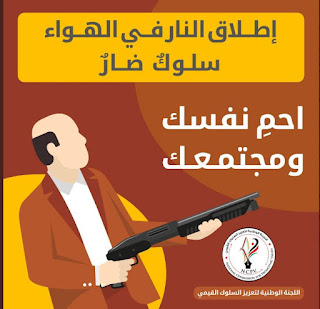 A fatwa had been issued earlier, but it had been largely ignored.

Fatwa: The reign of shooting in the air
Shooting shots on occasions, such as joys, success, and funerals, is legally forbidden, a Muslim is not permitted to do so; for the following five reasons:

1. These actions include harm to Muslims without right; they may cause infallible death, or injury, and one of the reasons for the deserving of painful punishment, the Almighty said: {And those who harm the believers and the believer without gaining, have lost Endure slander and manifest sinthmạ [Parties: 58].

2. The intimidation of the Muslim is forbidden and of the great, and the shooting in the air is not without intimidation of women, children and passers by; Abdul Rahman bin Abi Layla said: The owners of Muhammad peace be upon him told us that they were with the Prophet (peace be upon him) Peace be upon him, a man of them fell asleep, so some of them went to a rope with him, and he took him, so he panicked, and said, ′′ Peace be upon him, ′′ It is not possible for a Muslim to terrorize a Muslim ′′ (Abu Dawood: 5004), and about my father Huraira (May Allah be pleased with him) said: (Whoever refers to his brother with iron, the angels curse him until he calls him, even if his brother to his father and mother) (Muslim: 2616).

3. Islam has forbidden to carry arms exposed; lest it harm Muslims accidentally; for the hadith of Abi Musa, may Allah be pleased with him, that the Prophet (peace be upon him) said: (If anyone passes in our mosque or in our market with nobility, let's catch On her blade, or he said: Let his palm be arrested if one of the Muslims afflicts something) (Bukhari: 452, and Muslim: 2615).

As the law forbids pointing arms at a Muslim; lest it remove his hand; Abu Huraira, may Allah be pleased with him, said: (No one points to his brother with weapons, he does not know anyone may Satan takes off in his hand, and falls into a pit of fire) (Bukhari: 7072, and Muslim: 2617; how can he who uses weapons, and fires in the air, and between alleys, and in the roads?!

4. Shooting in the air is a waste of money in his legitimate face, and this is a forbidden waste, Allah forbade him by saying: {Indeed, the wasteful were brothers of demons and Satan was for his Lord is honorable} [Isra: 27].

5. The possession of weapons is a law to defend religion, to lie about souls and symptoms, and to provide it to the jihad for the sake of Allah from the power we have been commanded to prepare, it cannot be used in vain and oppression, otherwise it will become a use of weapons There is no intention, and in this is disbelievers, and God forbid.

According to the above: The shooter in the air is legitimately sinful, and guarantor of all that reckless acts of people's lives and property, and if shooting in the air kills a soul - God's destiny - it is semi-intentional killing, In which the penalty is severe; he deliberately fires without legitimate need, knowing that he is a thought of destroying souls.

The judicial and police authorities are also legally required to prevent these mischievous acts; the consequent corruption that harm people in their souls, their eternal and their money, and it is known that the duty of the Sultan is to preserve the interests of Muslims; to bring benefits to them, and pay Corrupting them, allowing fools to shoot shots on different occasions is a great corruption.

As of this week, the campaign appears to be a failure. A paramedic was wounded near Nablus, and given the nature of the wound, it likely from "celebratory gunfire". 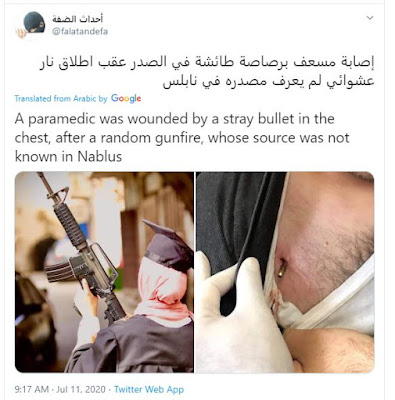 Killing their own or wounding their own may not actually matter to the Palestinians because they can always blame Israeli "snipers" and the world will believe them.
Posted by Dusty at 12:18 PM