Could Ann Arbor voters pick a worse choice than Mozhgan Savabieasfahani for Ward 4?

If you lived in Ann Arbor, a leafy enclave in Michigan,  you might be concerned about the cost of housing, or the deteriorating infrastructure. You might want to elect representative to the City Council with a commitment to fix "the damn roads".

Mozhgan Savabieasfahani is hoping what motivates Ward 4 voters is local involvement in an intractable foreign conflict thousands of miles away from Michigan.  She is running for Ann Arbor City Council on a "Divest from Israel platform"

Savabieasfahani is no stranger to activist politics.  Her facebook page is full of the language of demonization and dehumanization as she urges her followers to boycott Israeli "butchers" 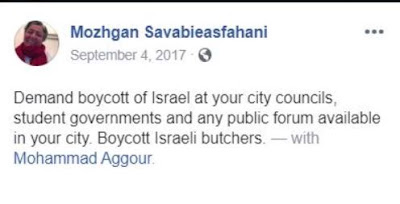 Most alarming, Mozhgan Savabieasfahani is part of a contingent that has been harassing members of a local synagogue every Shabbat, when they go to pray.  Much of the signage is unabashedly anti-Semitic.

The harassment has been going on for years, but was given wider attention when the Lawfare Project filed a lawsuit against the City, and the  protesters. The plaintiffs are Beth Israel Congregation member Marvin Gerber and Ann Arbor resident Dr. Miriam Brysk, a Holocaust survivor.

"The City of Ann Arbor has completely abdicated its responsibility to protect the Jewish community from targeted, racist harassment at the hands of these protesters. There are few greater civil rights violations than impeding the free exercise of worship and assembly, and we are here to demand the city hold the protestors accountable under existing federal, state, and local laws."

"Not only are the protestors harassing innocent people on their way to synagogue, they are actually in violation of the city's ordinances. However, the city has long refused to place even modest restrictions on them. The City of Ann Arbor could have at the very least enforced its own city code to substantially limit the protests, but instead city leaders have done nothing and allowed the harassment to continue for over a decade and a half."

In spite of her history of activism, the Iranian born Savabieasfahani is reported to have registered to vote only recently, in October of 2019.

The County chairwoman of the Michigan Democratic Jewish Caucus Joan Lowenstein has stated “Mozhgan Savabieasfahani’s hate-filled candidacy for Ann Arbor City Council is an affront to the universal values so integral to this city, as one of Michigan’s great intellectual centers.”

For more information on the blatant antisemtism of  Mozhgan Savabieasfahani, see

Well, I guess JUan Cole has a soulmate in Ann Arbor.

that's a shame, i visited Ann Arbor once about a year and a half ago. i liked it, it was a cool town and i didn't see any evidence of any anti-Israel bullshit. at least not in plain site anyways.