Its not about the green line or about the so-called occupation.  It never has been.  Its about Israel's very right to exist. Its about hatred for Israel's triumphs.

Galilee Green in Israel has been selling extra virgin olive oil from Israel for 3 years, and has amassed a loyal following and rave reviews on their product.   Last week, their facebook page came under  a coordinated attack, encouraged by posts like this that were shared widely across social media. 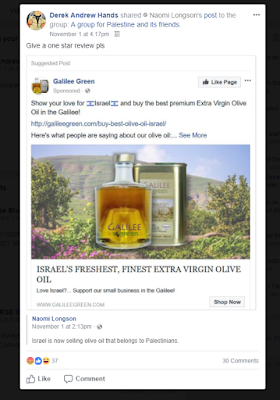 Dozens of Facebook users have bombarded the Galilee Green Facebook page urging people not to buy their products, based on their claims that the products come from “stolen land” and “stolen olives” as well as far more virulent accusations.“Ironically, we work with Kibbutz Deganya Alef,” Galilee Green president and CEO Rabbi Shmuel Veffer told The Jerusalem Post on Thursday. “The land the trees are on was purchased from the Ottoman Turks before WWI and the Balfour Declaration. Our offices are in Yavne’el on land purchased by Baron Rothschild from the Turks and Yavne’el was founded in 1901. The land here and at Deganya was rocky and barren of trees.”Veffer and his wife, Chana, founded the company together with Nili and Arnie Abrahams, all of whom are immigrants from Toronto, Canada.The first bombardment of messages, many in the form of one-star reviews, succeeded in bringing Galilee Green’s 5-star rating down to 3-stars.

How can you help fight the haters?

Like the Galilee Green Facebook page. Leave a kind word and some encouragement.
Consider a purchase (free delivery to North America!)
Go to the one star reviews- the one who have clearly never tried the olive oil.  Click on the three dots “…” at the top right of the offensive review and “Report” it to Facebook. If they get enough complaints, they will potentially remove it and ban the user. 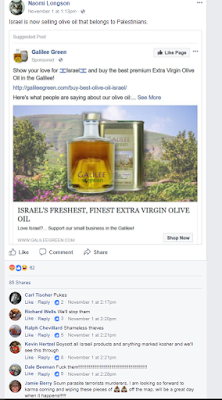 When they write "Boycott all Israeli products and anything marked kosher" you know its nothing less than garden variety Jew-hate.
Posted by Dusty at 11:30 PM

every business or brand from Caterpillar to Trader Joe's to SodaStream to ZIM to Cliff's Variety and even Gal Gadot that has come under assault by the anti-Semitic BDS movement continued to prosper with no or at worst some temporary inconvenience. Galilee Green Olive Oil will prove to be no exception but we shouldn't be complainant, at least make the effort to push back on facebook and maybe even make a point of buying some of their products.

Not everyone who had a problem with galilee green Is BDS! IN 2015 I had a very unpleasant experience with this company. I will never purchase or recommend this product again! If people can't see the truth of a truly overpriced and to me, a dishonest bus. Then how can I possibly make a difference without tarnishing Israel. And I think they are using this very reason to continue unfair practice!