The agency has filed a complaint with Hamas and has stated:
"It is unacceptable that students and staff are placed at risk in such a way," it said. "The construction and presence of tunnels under UN premises are incompatible with the respect of privileges and immunities owed to the United Nations under applicable international law, which provides that UN premises shall be inviolable. The sanctity and neutrality of UN premises must be preserved at all times."

The agency also said it condemns “the existence of such tunnels in the strongest possible terms,” adding that it was “unacceptable that students and staff are placed at risk in such a way.”
Israel’s Ambassador to the UN Danny Danon  responded to the news by stating “the cruelty of Hamas knows no bounds as they use the children of Gaza as human shields. Instead of UN schools serving as centers of learning and education, Hamas has turned them into terror bases for attacks on Israel.” 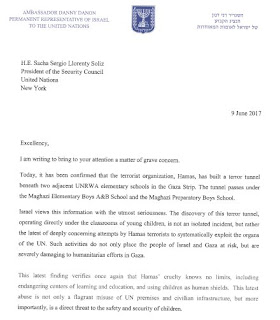 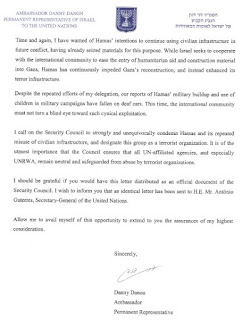 Coordination of Government Activities in the Territories  (COGAT's) response 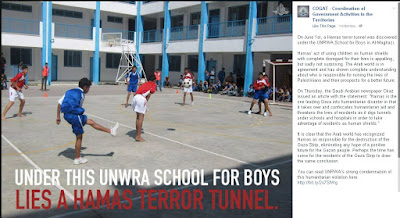 On June 1st, a Hamas terror tunnel was discovered under the UNRWA School for Boys in Al-Maghazi.Hamas’ act of using children as human shields with complete disregard for their lives is appalling, but sadly not surprising. The Arab world is in agreement and has shown complete understanding about who is responsible for ruining the lives of Palestinians and their prospects for a better future.On Thursday, the Saudi Arabian newspaper Okaz issued an article with the statement: ”Hamas is the one leading Gaza into humanitarian disaster in that it takes over and confiscates humanitarian aid and threatens the lives of residents as it digs tunnels under schools and hospitals in order to take advantage of residents as human shields."

It is clear that the Arab world has recognized Hamas as responsible for the destruction of the Gaza Strip, eliminating any hope of a positive future for the Gazan people. Perhaps the time has come for the residents of the Gaza Strip to draw the same conclusion.

Terror groups in Gaza have used UNRWA facilities in the past.  A UN inquiry found  that Palestinian groups hid weapons in three UN-run schools in Gaza and  likely used UNRWA schools  to fire rockets at Israel during Operation Protective Edge.