Josh Bornstein was just the victim of an elaborate hoax, perpetuated by haters, and  facilitated by a lack of  editorial control on the part of the Times of Israel.

The Times of Israel is an online Jerusalem-based newspaper founded in 2012 to document developments in Israel, the Middle East and around the Jewish world.   It has a "blog" feature, to allow activists and independent journalists to share their work.

Posts are contributed by third parties. The opinions, facts and any media content in them are presented solely by the authors, and The Times of Israel assumes no responsibility for them. In case of abuse, report a post.

A racially charged blog post was published, using the name of an Australian attorney and writer, Josh Bornstein.  Bornstein  responded that he had never started a blog at Times of Israel, and the post was removed, but not before the backlash began. 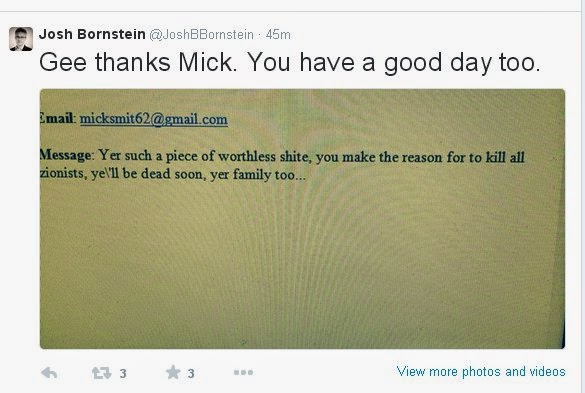 The Times of Israel described the elaborate hoax, writing

The Blogs platform on the Times of Israel was breached in an elaborate manner by a malicious hoaxer who on Thursday posted a hateful and racist post.

This hoaxer, it turns out, had opened a blog on the website some weeks ago using the identity of Josh Bornstein, a respected Australian lawyer, appropriating Bornstein’s name, biography, photograph and taking steps to lend the blog credibility.

Times of Israel staff had no reason to suspect this was a hoax, also given that half a dozen posts were published on this blog in subsequent days, all on topic and perfectly reasonable. As we found out Thursday, these posts were taken from Bornstein’s articles elsewhere on the internet.

After establishing his credibility on The Blogs platform, the impostor Thursday published a blog post that was vile and disturbing in the extreme. Shortly after it was published, we removed this blog post and the entire blog, and began investigating what had transpired. The post had also been copied to an online archive with the obvious intent of causing maximum harm.

We are dismayed that The Times of Israel fell victim to such a malicious and hateful hoax. Needless to say, we are appalled that the Times of Israel’s blog platform was taken advantage of in this manner.

We sincerely apologize to everyone who was affected, directly or indirectly. Most especially, we apologize to Josh Bornstein.

That hasn't prevented anti-Israel activists from posting archived and screen-shot copies of the removed article in an effort to demonize the Jewish people, Israel, and the Times of Israel. Agitprop sites on Facebook and Twitter continue to post the removed article without explanation
The falsified and  fraudulent Josh Bornstein blog post in the Times of Israel shows how far anti-Israel activists will go to demonize the nation state of the Jewish people. Its yet another example of Pallywood from the haters of truth and the haters of Israel.

UPDATE:
From the incomparable Elder of Ziyon- a neo-Nazi takes credit for the hoax.