Gilad Atzmon: coached by JVP and Ali Abunimah on avoiding accusations of antisemitism

Its meltdown time for the anti-Israel cru, and those of us watching from the sidelines aren't shedding any tears. Its not just this week's  triple exposure of Seattle blogger Richard Silverstein,  confirming him as a bully and a fraud .  Rapid hate-monger Gilad Atzon has revealed startling new information about his relationship with the Electric Intifada's Ali Abunimah, as well as with Jewish voice for Peace.

Admittedly, Gilad Atzmon's veracity is questionable. The saxophonist is better know for his lapses into pure antisemitism than for his musical prowess.  Last year, much of the anti-Israel community disavowed and disassociated with Atzmon.  (Not so Deppen Webber and Paul Larudee of the International Solidarity movement  They used Atzmon for a fundraiser in Oakland in support of the "Global March to Jerusalem".)

Surprisingly Gilad Atzmon recently revealed that both Ali Abunimah and  Jewish voice for peace coached him on avoiding accusations of antisemitism, urging him to "refer to Zionism instead of Jewish identity" 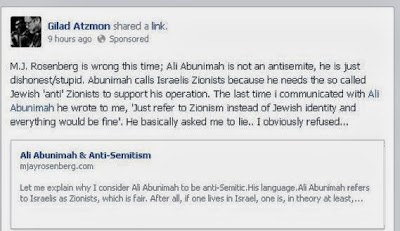 Originally revealed via Twitter and Facebook,  Atzmon was encouraged to tell more.  And he did, writing in his blog

It is not a secret that Abunimah and myself are not on cordial terms.  Yet, we communicated briefly in 2010 following Abunimah's laughable statement on history and culture. Here is a juicy bit of information Abunimah would probably prefer to keep hidden from the public eye: On the 1st of December 2010, Abunimah wrote to me in an amicable manner:

“What you describe as ‘Jewish’ might perhaps be more accurately described as ‘Zionist,’ - and then we might find grounds for a lot of agreement”

Abunimah basically advised me to mislead my readers and say ‘Zionist’ whenever I mean to say ‘Jewish’ so we (he and I) can ‘find grounds for a lot of agreement’. Around the same time I also met with a JVP top leader who repeated pretty much the same line. "Don’t refer to Jewishness, make sure you concentrate on Zionism," she said, "you will then enjoy our support."

According to Atzmon, both Abunimah and JVP urged him to use "Zionism" as an all purpose "get of of jail free card" , to avoid accusations of antisemitism.  Atzmon chose not to listen to their advice and later was denounced by them.

In Jewish voice for Peace's case, liars need good  memories.  An email from  Jewish Voice for Peace, Los Angeles sent 05/04/13 actually promoted  Gilad Atzmon's May 17 concert in the Levantine Center , over a year after their proclamation  stating " we cannot endorse events in which he takes part."   The endorsement also appears on the JVP website.

In spite of  delusions of his own integrity Gilad Atzmon is not the hero in this sordid little tale.  He is still a vile anti-Semite.  But JVP and Ali Abunimah are equally complicit through their attempts to shield this evil little man.