Demonizing Israel for love or money

Its been obvious for some time that the Internet is one of the main fronts in the battle for hearts and minds in the war in the Middle East. Qatar believed in the power of the web so strongly, they hired a large public relations firm, Fenton Communications to advocate on line for Hamas, er...Gaza...

According to an article by Ken Timmerman, Qatar hired the public relations firm to

• Train a spokesman for the group and provide “leadership development curriculum for student leaders”
• Conduct “spokesperson training sessions” for student leaders
• Monitor social networking and mainstream media outlets and blogs
• Develop press materials and “pitch stories to university and mainstream press”
• Train students how to research, compose, and produce propaganda clips
• Conduct outreach “to potential political partners in the United States”the cash from Qatar bought a sophisticated U.S. media campaign aimed at manipulating public opinion to generate support for the Hamas-led government and the people of the Gaza strip.

After Fenton communication registered as a foreign agent the story was exposed, and they dropped the account like a hot potato.

Don't despair, children. Even if you don't have the power, backing and funding of a Middle eastern emirate behind you, there are still ways you can demonize Israel via the net. 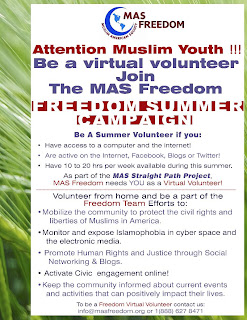 Yes, you too can troll the Internet, demonizing Israel in your spare time. The volunteers trained by MAS will act and speak as ordinary net-surfers and as citizens, and will write responses that will look personal. They work around the clock writing anti-Israeli responses on Internet websites all over the world, and on services like Facebook, Twitter and Youtube. Sign up as a "virtual volunteer" for the Muslim American Society, and they'll show you how.
Posted by Dusty at 10:06 AM