The extremist group, Arab Resource and Organizing Center  (AROC), directed by Lara Kiswani has signed a memorandum of understanding with the San Francisco School Unified  Board to facilitate Arabic language and cultural teaching in our local public schools.  The SF Unified Boards decision is a shocking breech of responsibility towards the young people of our city.

Lara Kiswani is infamously known for taunting a tearful student at UC Berkeley, who after expressing her desire for open communication, was subject to Kiswani's hateful retort.

“See, part of the problem with the Palestine question particularly on campus is it always gets framed as this two-sided thing and liberal democracy loves to make it seem like everyone has a right to speak, including the oppressor alongside the oppressed. … I don’t think that this form of liberal democracy really has a place in terms of real struggle. … Maybe liberal Zionists here on this campus have a hard time understanding what that means. … As long as you choose to be on that side, I’m going to continue to hate you.”

Lara Kiswani also participated in the assault on a peaceful vigil at Reem's bakery in Oakland,  prancing around with signs ripped out of the hands of Jewish seniors. 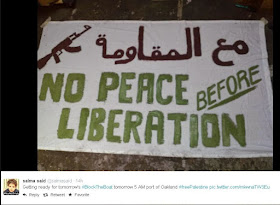 The J Weekly has documented other examples of the extremist agenda of the Arab Resource Organizing Center, here.

The Zionist Organization of America has called upon the San Francisco School Board to cancel the contract with AROC , writing

We, like many members of the San Francisco community, were shocked and outraged to learn that on May 22, you approved a proposal to grant the Arab Resource and Organizing Center (AROC) a contract to provide training and workshops to students in San Francisco’s public high schools.  Given this group’s hateful, divisive and anti-Semitic conduct, it is impossible to fathom how you could have made this decision.
The school district claims to be committed to building school environments that celebrate diversity, reduce prejudice, and enhance understanding between individuals and groups – going so far as to make these commitments in a 2016 resolution.  The district expressly committed in the resolution to protect the well-being of all its students and families – which must include those who are Jewish and support the State of Israel.
The Clarion project asks " Why Will San Francisco students High Schoolers Learn hate?" and urges people to contact the school board.

This group is inappropriate for our schools. The Bay Area has a large Arab-American population. Why can’t the district seek out and hire Arabic-speaking service providers from the community who are not hateful and politically-compromised?

If you are concerned please:

2) Call the District and the Board at: 415-241-6000  to say the Memorandum of Understanding (MOU) that allows the Arab Research and Organizing Center (AROC) to teach San Francisco High School students is a bad idea.

3) Email the board and superintendent at: