Tacoma Block the Boat: Anatomy of a fail

Block the Boat Tacoma has followed the same trajectory as so many other BDS actions. A period of manic self promotion and a failure to achieve an tangible aim has been followed by a rapid series of "even when we lose, we win statements", and the defeat, now wearing the laurel wreath of "victory" is never spoken of again.

About 100 people opposed to Israel’s military action in Gaza formed picket lines outside Washington United Terminals gates on Port of Tacoma Road shortly after 7 a.m., in an attempt to keep longshore workers from unloading the vessel Chicago, owned by the Israeli company, Zim Integrated Shipping Services.

Instead, longshore workers were taken to the terminal by an alternate route and began their shift as usual. “We’re not going to talk about how they got in,” said Tara Mattina, a Port of Tacoma spokeswoman. “The ship did come in as expected, and the longshore workers started working at 8 a.m.”

The Police were also well prepared for this action

Tacoma police kept their distance Saturday morning, but they set up a roadblock on the Port of Tacoma Road for about 45 minutes, allowing access only to port workers with identification. Port security officers refused to allow parking in the vicinity, threatening to tow cars along Marshall Avenue and Port of Tacoma Road.

The self reporting from the anti-Israel activists provides a different perspective. They distributed leaflets promoting the scurrilous and discredited  apartheid meme 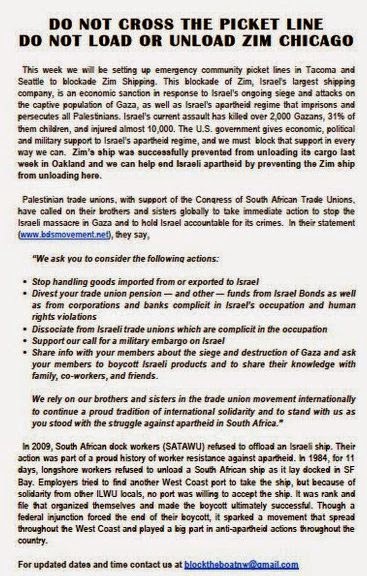 When thwarted in their efforts gain access to the docks , some activists discussed forging press passes. 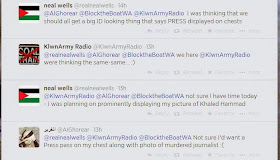 Despite claims of ILWU "solidarity" with their aims,  the local ILWU was unimpressed. ILWU Local 23 President Dean McGrath firmly declared via Twitter  'No organization will hijack our 'muscle' for their purposes." 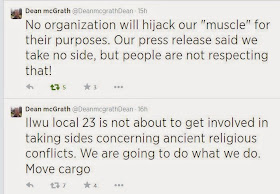 With no worker "solidarity" for their cause, the protesters tried to physically prevent union members from reaching their destination.

A fight erupted when about 50 protestors tried to prevent workers at the Port of Tacoma from getting in and out of their parking lot.  The protestors were part of a growing group called "Block the Boat,” which was attempting to keep an Israeli cargo ship from unloading in Tacoma Saturday morning.

Protestors swarmed a man's minivan at the entrance of the parking lot.  When he finally got out to approach the gate, there was a physical confrontation. Other workers were trying to get home after their shift but they were trapped by the group.

Protesters shamelessly bragged about using their young children to obstruct  the workers.  (Children as human shields? Where have we seen that before?) What kind of parent would do this? 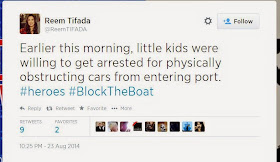 As the protesters slowly realized they were on the brink of failure, their rhetoric escalated. The talk was no longer of unions and solidarity.  Thinly veiled threats were made to the port. The action was no longer about the Zim ship. It was about shutting down the entire port.

Zim's customer line was next in the cross-hairs.  This is nothing short of  economic terrorism.

In spite of the protest, The Zim Chicago docked and was unloaded  without major incident.

Cue the "When we lose, we win statements", in all their infinite variety 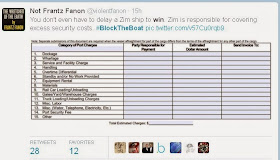 On Monday, the "block party" continues, with Block the boat Seattle.
Dusty at 9:43 AM
Share